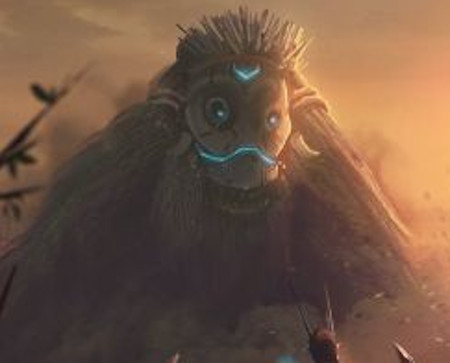 When we think of fantasy we think of wizards, knights, adventurers, treasure, magic, and endless exploration. Many fill those fantasies with something else, without even realizing it: white people.

The Wagadu Chronicles from studio Twin Drums is seeking to change all that, as Berlin-based creator Allan Cudicio recently explained to the media. Due to be officially unveiled in the summer with a crowdfunding campaign, the game is an Afrofantasy online RPG and a tabletop adventure, and Cudicio hopes Twin Drums can create a new space in the fantasy genre through The Wagadu Chronicles.

“I’m half Ghanian and half Italian,” Cudicio says, and having grown up mostly in Italy, he developed a real understanding of European history. “The cities, the culture, the kingdoms, the kings and queens are all so cherished.”

However, he felt his “other half [was] invisible in mainstream culture. Even in African schools there’s a lot of neocolonialism: you open a textbook and there’s more about European history than there is about African history.”

After a conversation with his grandmother – family is a recurring theme throughout the interview – Cudicio wanted to learn more about his Ghanian heritage, and with ambitions to create a role-playing game, decided it was only natural to combine the two.

“Most games devs would say that their game is super important,” Cudicio jokes when asked about the game’s place in the world, but it’s clear that The Wagadu Chronicles does fill a huge gap in the fantasy genre. It’s not just that he’s twisting typical conventions — something he compares to “creating an orc with two heads” — but that the game explores crucial, untold stories; “the whole genre [of Afrofantasy] is missing within the medium of games.” He’s trying to emulate what Black Panther did in the superhero genre.

“We’re saying ‘hey, you can have a video game that is based on the African continent and still have a lot of people play it’,” explains Cudicio. “Hopefully it’ll influence people to do the same with their own cultures if they’ve been misrepresented or not represented in media.”

When asked to describe the game in one word, Cudicio picks “community,”; another running theme of the interview. “Whoever you are, play the game. It’s for you as well.” A big issue with the lack of representation in fantasy is that when people don’t see themselves, they don’t feel like they’re welcome, and The Wagadu Chronicles is aiming to fix that.

Deeply rooted in his own history, Cudicio recalls how the game helped him feel closer to his mother.

“Many immigrant parents from developing countries want their children to be lawyers or doctors or diplomats, so being a game designer is growing on her, but when I mentioned this game was set in a fictional African world, for the first time she really connected,” recalled Cudicio. “She called me up maybe a few months after I’d started the project, and she wanted to tell me about the spirits of the forest close to where she was born. In thirty-something years of my life, I’d never, ever heard about the spirits of the forest. She never talks about these things, and somehow it took making this game to get this out of her.”

“When it’s in your head and you’re building something, you never know what’s going to happen. Are people really going to care?” Cudicio explained, “But it was very heartwarming. 99 percent of the comments were very heartwarming, I was expecting a lot more racism or even homophobia, because you can look at my profile and see that I’m queer.” The community Cudicio is seeking appears to be forming in front of him.

It’s clear the longer we talk that this has been a deeply personal journey for Cudicio, resulting in a game made with love and passion, not focus groups and key demographics. When I ask about some of his favorite myths, legends and historical figures he uncovered during his research, the answers pour out in a wave of enthusiasm.

“There’s so many things I discovered, I wouldn’t know where to start,” Cudicio laughs, before the examples come thick and fast, “I think some of the most interesting were the women warriors from the Kingdom of Dahomey. A whole garrison of women were fighting for the King, and it’s amazing; it’s not even a myth, it’s a real thing. In the West you have this myth of the Amazons, which is this really exotic thing, but a hundred years ago in Africa, women were actually doing this.”

These women and others like them were a massive influence for The Wagadu Chronicles, with so much of the concept art shared so far centering on female led stories. Other examples rattled off include the early concept of democracy in modern day Nigeria, which included village representatives, lively debates and women involved in the democratic process long before the Suffrage movement in the West.

“We have this idea what democracy is very Western, starting in Athens and with only men,” Cudicio explains, but the truth is that the right to a fair say is a global concept. There’s also King Mwanga II of modern day Uganda, a queer leader with both male and female concubines.

“It wasn’t until the foreigners came, the Christians came, the Muslims came, that he was forced to stop having male concubines,” he continues. “Nowadays sadly you have people all across Africa saying queerness is something that comes from the West, but that’s not true.”

Exploring realms of fantasy beyond Tolkien

The Wagadu Chronicles is exploring African history in ways seldom seen in video games. The influence of The Lord Of The Rings in fantasy is unavoidable, but as Cudicio explains, that’s been both a blessing and a curse.

“I love The Lord Of The Rings, for the record. It was a formative experience and it blew my mind as a kid, but I think the problem is people look at the result: this world inspired by northern European and Gaelic mythology and so on,” says Cudicio. “They don’t look at the methodology, which is what made it great. It’s built from tons of research into languages, mythologies, histories, alphabets all put together into a world.” 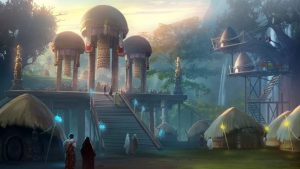 In short, The Lord Of The Rings put in the work, but too much fantasy came along after it and simply borrowed its ideas, resulting in a vicious circle of Eurocentrism. “If people were to study from real sources, from cultures around the world, and created their own ‘Middle-Earth’, there would be a lot more diversity.”

As we move on from The Lord Of The Rings, it’s telling that when I ask for an good example of diversity and inclusion, Cudicio skips right over fantasy entirely in favor of Clementine and Lee from Telltale’s The Walking Dead. When it comes to fantasy, representation is often quite tokenistic.

“There’s a lot of tokenism, you could make a huge list,” Cudicio says. “The unconscious bias is so hard to deal with because those people don’t think there’s a problem. How can you solve a problem if you don’t even acknowledge it?”

There have been black people in fantasy previous of course, but often their stripped of any tangible African influence. “I think what happens is you get very Western fantasy with people painted black, basically. There’s metal armour or a French looking knight, just with an afro or black skin. It’s good, it’s better than nothing, but we need to move a step further. It’s a very Eurocentric blackness.”

The very fact that we see ‘whiteness’ as the norm in fantasy has already been clear from some reportage of The Wagadu Chronicles. The word “Afropunk” has been used to describe it, but Cudicio was keen to point out that those comments are off-base. 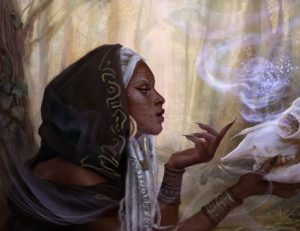 “Would you describe The Lord Of The Rings as ‘Europunk’? The sounds weird, and it’s the same with Wagadu. I see where people are coming from, but it doesn’t fit.”

It’s not a rebellion against fantasy at all, in fact The Wagadu Chronicles is an embrace of it; just exploring Afrocentric mythos rather than European legends.

“It’s very much fantasy, building upon history and traditions and aesthetics and people,” concludes Coducio. “Then adding magic to it to make it wonderful.”